The Beatitudes: Antidote To A Deranged Society | A2D TalkShow

The Beatitudes: Antidote To A Deranged Society

The sermon on the Mount may be a solution to our ever-dying and hostile society. On the Mount, Christ presents what may become the antidote to everyday societal problems. In a society plagued with the diatribe of political and societal differences. A world of group identity or collectivism, where the value of the group is placed higher than the individual. A society where Evil is praised as Good and Good is criticized as though it were Evil. How do we fix a community as complex, flawed, and arrogant in its flaws? Maybe our rules and laws can longer breed peaceful coexistence. Maybe our leaders need the war between groups for their political benefit. Perhaps the beatitudes can help us fix this deranged and belligerent society.

The Beatitude is the first idea or truth that Christ shared on the Mount. The Beatitude describes the character of an ideal society and culture. Now the question is,  what is an ideal society? Well, we will never know (practically), but we know we are far from the perfect society. However, We have improved over the years. The fact that sane humans still exist after the horrors of the 20th century is a miracle in itself. In the 21st century, we have a seemingly stable society. We still have broader lines in this seemingly stable society. One may hope and think these dividing lines will get blurred as we progress. You are either black or white, left or right, liberal or conservative, rich or poor. We have too many battlefronts, and in the end, we all lose. Yes, we are different, but what happened to unity in diversity. 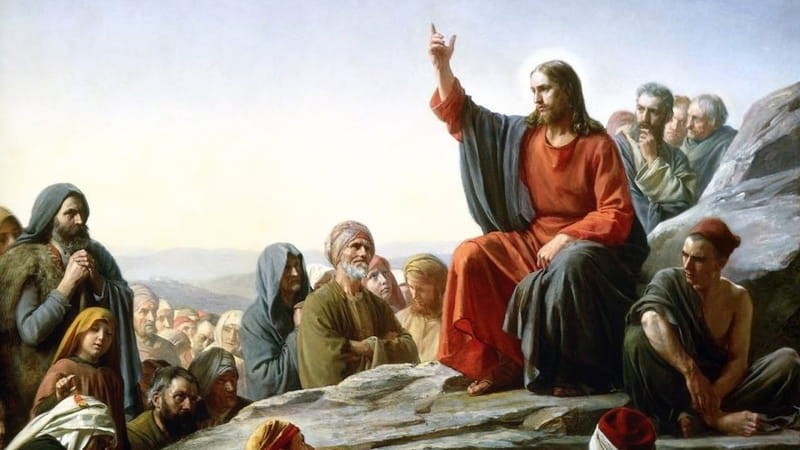 The beatitudes are impossibly hard to fulfill but set the standard that we try to meet. Christ presents this standard with nine pillars.

“3“God blesses those who are poor and realize their need for him,a

for the Kingdom of Heaven is theirs.

4God blesses those who mourn,

for they will be comforted.

5God blesses those who are humble,

for they will inherit the whole earth.

6God blesses those who hunger and thirst for justice,b

for they will be satisfied.

7God blesses those who are merciful,

for they will be shown mercy.

8God blesses those whose hearts are pure,

for they will see God.

9God blesses those who work for peace,

for they will be called the children of God.

10God blesses those who are persecuted for doing right,

for the Kingdom of Heaven is theirs.

11“God blesses you when people mock you and persecute you and lie about you and say all sorts of evil things against you because you are my followers.

12Be happy about it! Be very glad! For a great reward awaits you in heaven. And remember, the ancient prophets were persecuted in the same way.”

Blessed are the poor in spirt for theirs is the kingdom of Heaven.

The poor in spirit understand and acknowledge how malevolent they can be. They realized that they are capable of evil and wickedness; this realization begs for a savior,  moral lawgiver, someone with a higher standard; a pure and holy standard. These two attributes (purity and holiness)  for sure cant be founded amongst men or women. It can only be found within the concept of a God. In our society, where arrogance and hubris thrive, leaders cannot accept their wrongs or incapability and seek help to fix them. Humility in our society is considered weak. Accepting one’s flaws helps us to understand and be patient with others when they fail.

Blessed are those who mourn, for they will be comforted.

When you hear, mourn what do you envision? We conventionally think about evil happenings impacted by an external force (e.g., the death of a loved one). I believe Christ spoke not only about the bad experiences by external forces but also about people mourning their evil deeds. You see, the beatitudes is a hyperlinked text. The first Beatitudes speaks to recognizing our faults, the second Beatitude speaks to grieving the manifestation of these faults. Without the emotional blessing of sadness over our actions, we would probably never muster the gust to admit our mistakes.

Blessed are the meek for thy will inherit the earth.

We misconstrue meek as weak, tame, or deficient in courage. Meeks simple means power under control. Power under control practically is the refusal to inflate our own self-estimation and reticence to assert for ourselves. Most time, we hope for success in other to fulfill our vindictive thought. Are you genuinely humble? Well, you may say yes. If you had no person to answer to if you are under no instruction and if you have all you need and hope for, will you remain humble? The true test of humility is when you possess power, and it doesn’t possess you.

We have so much to learn from these three beatitudes. Imagine a society enacting the words of Christ on the Mount. What a great world it will be.

This is so true, but there are some other complexities such as the godless, faithless, faith in other religion that may not necessarily believe this.
BTW, the improvements on the site is massively impressive.