You Are More Likely Cain Than Abel. | A2D TalkShow

You Are More Likely Cain Than Abel.

“ It came to pass when they were in the field, that Cain rose up against Abel his brother and slew him.“

The story of Cain and Abel is archetypal to our current society. Abel offers a far greater and better sacrifice than his brother Cain. God honors the offering of Abel while rejecting that of Cain, then Cain kills his brother out of spite, jealousy, and envy. Spite, jealousy, and envy, this trio-nemesis brings out the most malevolence in any man, woman, or child. The story of Cain and Abel present Cain as the villain and Abel as the martyr. Due to this representation, we are more likely to attribute ourselves to Abel than Cain, but that is not true in reality.

We are more likely Cain in today’s world than Abel, but we have the most stable society since the beginning of man. This society of laws and culture over the years has suppressed the expression of Cain. Still, Cain is very much alive in us in the forms of malevolence and waiting for a suitable environment and reasons to express.

One of the leading causes of envy and even depression is comparison, but we are sociological beings. We interact with each other, and with interactions come many things; conflict, love, friendship, rage, envy, war, etc. we want to be top in every domain of life ( career, marriage, health, wealth ), and most times, we are not. Not because we are not conscientious enough to be at the top but because there is someone more willing to work harder or present a better and more acceptable sacrifice than we can, or it is just fate – the gods smile on them more than they do on you. Not being top in most domains put us immediately in Cain’s position and above us in Abel’s position.

For example, you graduate from college with your mates at the same time, possibly from the same field of study; life seems fair at this point. So did it for Cain; he had the same opportunity to offer sacrifices to God as his brother Abel. In six months, your peers are doing well career-wise (just one domain of life ) and you are not. Maybe you are doing great in other aspects like family, health, and all worth not. You may be doing well career-wise, but the main issue is, someone is doing way better than you while having the same college degree and opportunity as you did. You cant make sense of it.

The pivotal moment in Cain’s story is when he felt Abel was responsible for his mishap. If Cain and anyone in his position for a moment thought, what if I present a better sacrifice? what if I go to Abel asking how he did so well in his career? Maybe a simple act of self-responsibility will have change the story of Cain and Abel.

” 6And the LORD said unto Cain, Why art thou wroth? and why is thy countenance fallen? 7If thou doest well, shalt thou not be accepted?” 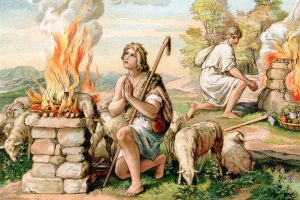 The offerings of Cain and Abel. Duncan Walker/ Getty images

We wonder why Abel has a better outcome within our hearts and minds while ignoring the obvious fact; we can do better for ourselves.

To paint a better grand picture of the Cain role, when we read about world war II ( one of the deadliest wars in history ), we may picture Hitler and Nazi Germany. However, 400 years before the holocaust, the Germans had Cain’s feelings towards the Jews. The Jews for a long time in Germany occupied the top class in Germany; due to this collective success, they became Abel. The Germans discriminated against the Jews long before Hitler; it was due to this animosity that led Martin Luther, who was a prominent figure, to publish an article in 1523 titled: “Jesus was a Jew.”. In this article, Luther encouraged Christians in Germany to be affable towards the Jews that Christ, their lord, and savior was a Jew when he was on earth. This collective Cain role poisoned this innocuous mindset that Luther had. In 1543 Luther wrote an article, this time encouraging Christians to be antagonistic towards the Jews. This message and the feeling it brought reached its crescendo in 1940, resulting in the infamous holocaust. Looking retrospectively, one may exempt themselves from playing the role of the Nazis, but that may not be true. At that time, you are more likely to support the Nazis than the Jews; why? Because the Germans felt their actions were just and vindictive, we suffer because of the Jews; hence obliterating them is a good course. There is always an excuse to be vindictive. Cain thought his actions were proper. Abel is the cause of my downfall, so killing him is more of a self-preservation strategy than pure wickedness.

Follow this line of thought, if all white people are racist or are presented as such, it ostensibly means that for black people to survive and thrive in a diverse society, the white man must leave the picture ( whatever that means). This becomes a more complex problem to solve because any black person who buys into this idea will have no sympathy or empathy for the white race’s sufferings ( if they suffer).

When life isn’t going well, we must look within first. We are more likely to find the answer within than without, and if we don’t, we must ask the crucial question; What can I do better to change the course of my life? What are successful people doing that I can do to better my life? in these questions lie answers that will make us able to perform better sacrifices

This is really good!

A very well though out article.

Man must also rid himself of comparison. And seek content my with the fruits of his/her labour.

An excellent and well thought out write-up.